Few people other than roofers give ridges a second thought. Roof ridges, of course, are the high points where two of the roof sides or planes meet along the length of the structure or a portion of it.

You know what I mean … Santa’s sleigh generally comes to rest with its runners hanging over the edge of or straddling the ridge. 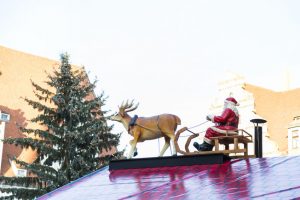 Most houses are relatively complex and have more than one ridge line because the roofs have multiple planes coming together in different areas and at different heights.

Why do builders make fancy roofs with multiple ridges? To make the job more complex for us roofers? Well, yes it does that for sure. But ridges are very cool, distinctive features. They add diversity and variation to the roofline. They’re there for a good reason and that’s why we accentuate them.

I can’t tell you how many times, as my crews finish up a roofing job, a neighbor comes by and says, “I can’t put my finger on it, but why does that roof look so much better than mine?” Well, there’s probably lots of reasons, but when we point out the high-definition, prominent ridge lines, their eyebrows go up and they say, “THAT’S IT!”

Our teams like the prominent ridge line feature so much that we wouldn’t do a roof any other way. We don’t charge extra for it. It’s just worth it for us to hear that inevitable reaction from the neighbor!